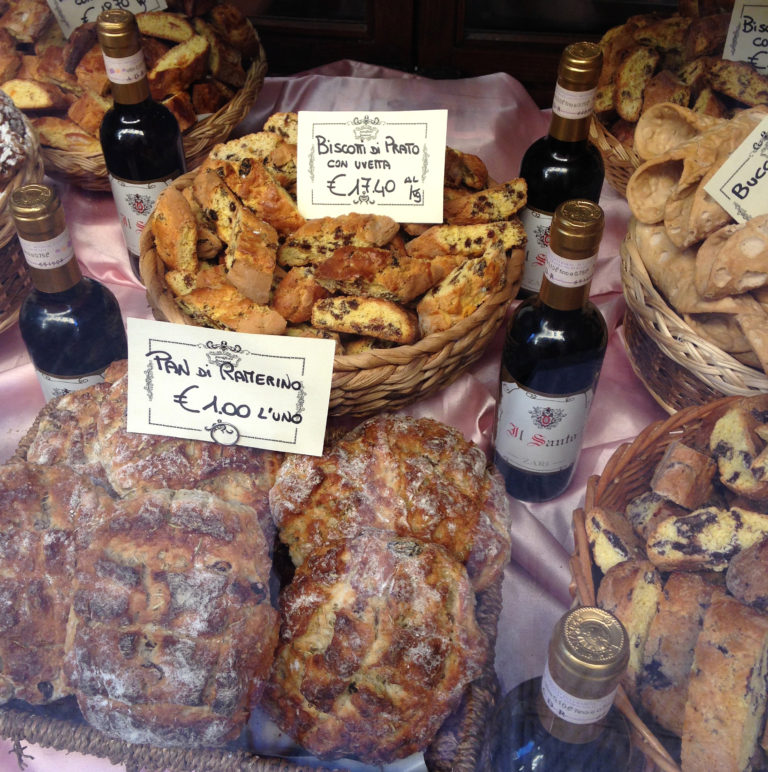 PRATO Because I’m an incurable foodie, during my stay in this city (as CCTraveller), I had to taste as much local cuisine as I possibly could stuff into my mouth at one time. I sought out all the specialities of Prato. It is only then that I feel like I can get a sense of a city. In addition to tagliatelle with porcini mushrooms and ribollita, there are several products from this territory, produced right here.

Prato, located in Tuscany, has a strong gastronomic culture.

Here, I’ve provided a list of some of the most traditional products and dishes for you to try. Here are the gastronomic specialities of Prato, the famous cantucci and much more! And, in addition, some places “to taste”! 😉 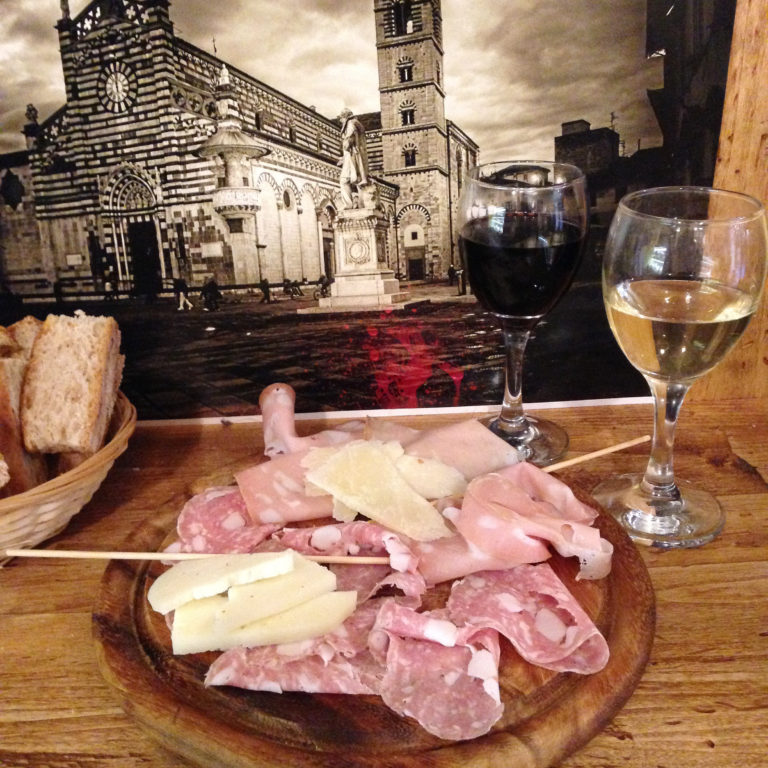 Click on the link to learn how to pronounce this word. All those i and c sounds… A crunchy flatbread drizzled with olive oil and salt. A traditional snack and oh so delicious. A much much much more scrumptious alternative of chips (UK crisps). Find an excellent version at Marcellino Pane e Vino.

I wasn’t sure about this typically Pratese dish before I tried it. I’m not a fan of celery, and this is stuffed celery. However, the addition of minced veal, mortadella, eggs, and garlic makes a common vegetable into a delicacy. It can be baked or fried. Find this at historical restaurants as Trattoria Soldano or many Pratese butchers will sell them already prepared.

The locals are very proud of this good-looking bread. As just about all Tuscan breads, it’s made without salt. This dates back to the great wars where such things were in short supply. Personally, I don’t really understand saltless and fatless bread but that’s for you to decide. I do, after all, live in France.

Dottato variety of dried figs from the local Tuscan hills. Served with cheese and mortadella as antipasto or stuffed with dried fruits (especially walnuts) and cream of ricotta cheese at the end of a meal.

Chestnut flour produced in this region for centuries. A revival of the product must be thankful for the gluten intolerant. 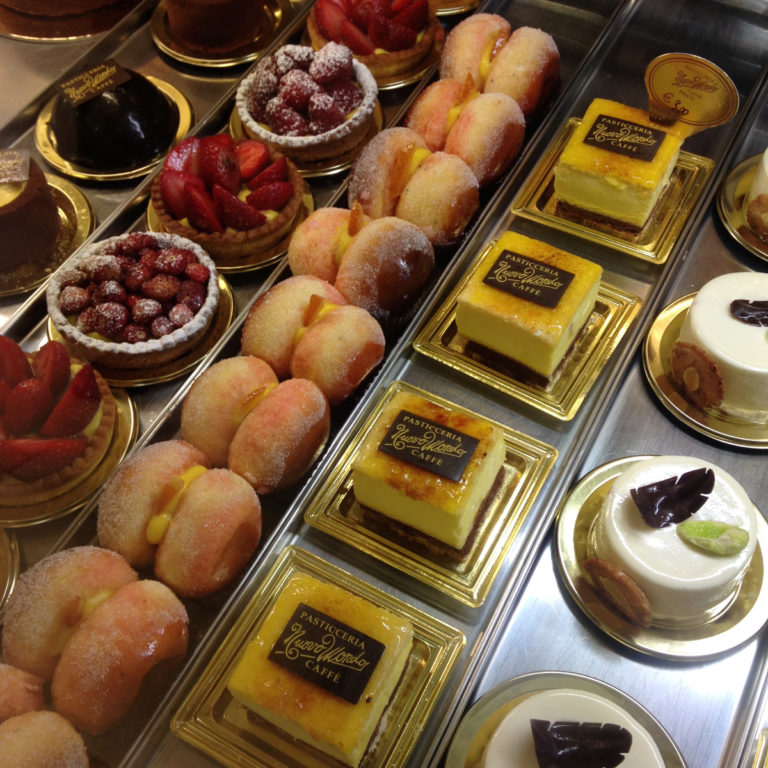 Pratese people are very proud of their award winning pastry chefs. Even Florentines have to admit that Prato has the best pastries.

A rich chocolate seven times layered cake made by Luca Mannori at Pasticceria Mannori. If you can’t eat the entire cake, bite size (gourmandises) are also available. Best to close your eyes when you eat them. Savour that molto rich ganache.

A symbol of Prato, these are a must try during your time in this city. We tried these in the morning. Beware, they have a kick! The best are considered to be those made by Paolo Sacchetti at the Pasticceria Nuovo Mondo located just before you enter the main square, Piazza Duomo, from Via Giuseppe Garibaldi (at number 23).

This is generally a Tuscan custard pastry. Not necessarily typical of Prato but oh my… Italians love their custard. Perhaps even more than the Brits? Good luck getting a croissant without custard (not that you’d want one). This is like a mille feuille with only one thick delicious layer.

These world famous almond biscuits are traditionally served with vin santo (see below) at the end of a meal. They quench the desire for sweets without being too sweet. The question is, to dip the biscotti in the vin santo or not? It seems that no one can decide. Find the best, most traditional version of these at Biscottificio Antonio Mattei in Prato. To see how they’re made, watch the video on their website! [Attention: you can receive them at home in their historic blue packaging by ordering them on Amazon!] 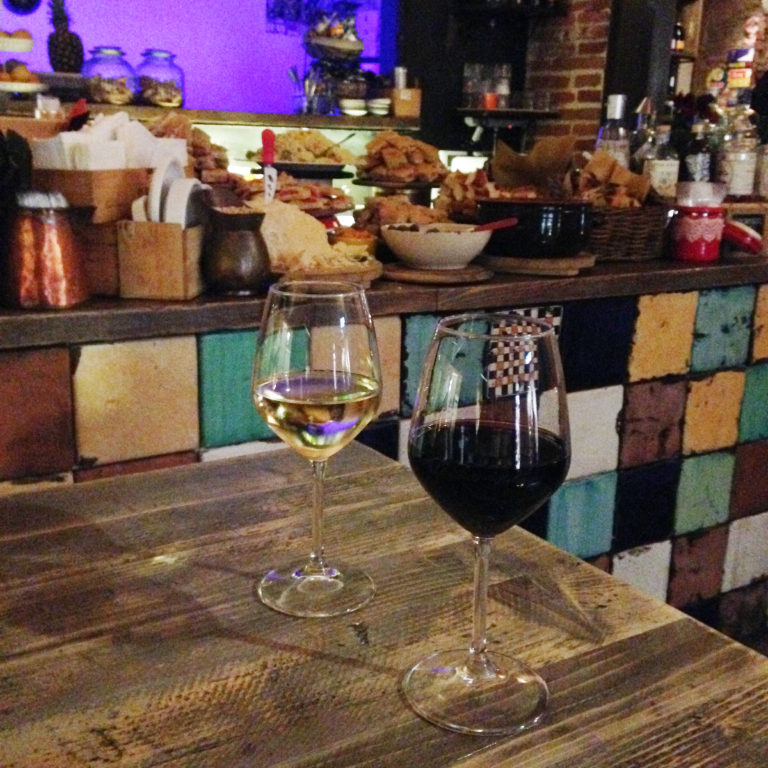 A red wine that has been well regarded since the middle ages; Carmignano was a favourite of the Medici family. It is simply one of the best wines of Tuscany. You’ll find producers south of the city of Prato, in the olive grove rolling hills of Tuscany on the Medici wine road. The wine is not as well known as it should be. In 1932, the region was shoe-horned into the much larger Chianti region. Thankfully Carmignano was granted it’s own appellation in 1975. Finally, it’s specific traditions were acknowledged. It’s the smallest zone in Italy be awarded it’s own DOCG status. The wine composed of Sangiovese (min 50%), Canaiolo Nero, Cabernet Franc, Cabernet Sauvignon as well as a few other grape varietals in much smaller percentages. The wine is smooth and robust at the same time.

Vin Ruspo is the region’s answer to rosé wine. The story of how it was created is actually quite interesting. It goes back to the sharecropping days. During the harvest in the Fall the sharecropper (peasant), with the excuse that it was late in the day, delayed bringing to the estates sellers the last batch of grapes which had been picked and then trodded on. During the night he drew off, or “ruspava” a certain quantity of must which ended up in his own cellar. The estate owners were perfectly aware of this but in order to keep the peace pretended to ignore it. The wine, which was only briefly fermented with the grape skins was stored in demijohns over the winter. There wasn’t any re-fermentation technique as was used for the red wines. Eventually, a merchant came across this peasant wine and decided to sell it. The same techniques are used today to make vin ruspo. Though of course, it’s done in cellars and there isn’t any stealing involved! The wine is semi-sparkling wine. A refreshing summer aperitivo.

Oh, what amber nectar this is. Vin Santo is the dessert wine of Tuscany. The vin santo was so delicious he kept making mmmmmmmmmmmm noises at the end of the meal. To make it, the finest bunches of grapes are laid on straw mats for four months. As you can imagine, the grapes can easily rot in the damp cellars of Tuscan winemakers. In order to control the environment, dry winds of the north are let in while humid winds of the south are not. If the air is especially humid, sulphur is burned in the rooms to prevent mildew. In January, when the grapes are almost raisins, they are de-stemmed and pressed. The liquid is transferred to small barrels for 3-4 years. The resulting wine is dense as olive oil and absolutely succulent. To be enjoyed as a dessert wine, especially with the “cantuccini” di Prato. The best is Capezzana Vin Santo. Apparently the Pope’s favourite!

NOTE: you can find most of these ingredients and more in Prato’s regional specialities store Atipico right in the centre of town (via Ricasoli, 13).

SOME PLACES TO TASTE AND TOAST:

Le Barrique Wine Bar: beautiful décor and ambiance. Watch out on Wednesdays though, you will be swarmed by ridiculously good looking young Italians singing Karaoke.

Pane e Vino Marcellino: intimate little panini place where you might be expected to join in on the conversation.

Pizzeria Maggie: simply the best Tiramisù I’ve ever had. Very popular with locals. I do a lot of research to find great meals and we went here our last night because it was close to where we were staying. The best meal, and the cheapest, we had in Prato. Note: you’ll need a car to reach this place in the suburb of Santa Lucia.

A COCKTAIL TO REMEMBER

NOTE: you can download this article, with GPS technology, on GPSmyCity. While traveling Prato, you can refer offline to this article.

You can read and see more photos on Ashley’s blog:

The Gastronomic Specialities of Prato, Italy 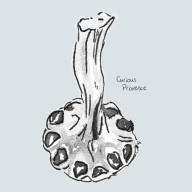 I'm from Montreal, Canada. Being an anglophone in a French province, I've always been interested in identity and the feeling of belonging. Now, I've moved to France with my British partner and it seems that the feeling of being from somewhere else will always stay with me. I studied fine art photography; I tend to love black and white film photography. Currently, I'm working at a French market in beautiful Provence. I'm eating the best tomatoes in the world (arguably), and I can't really ask for more!
WebsiteTwitterFacebookInstagram 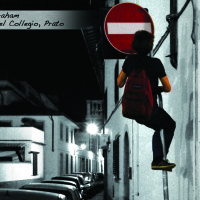 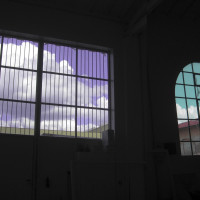 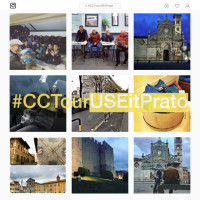 CCTour with USE-IT Prato | WORKSHOP to map and share stories