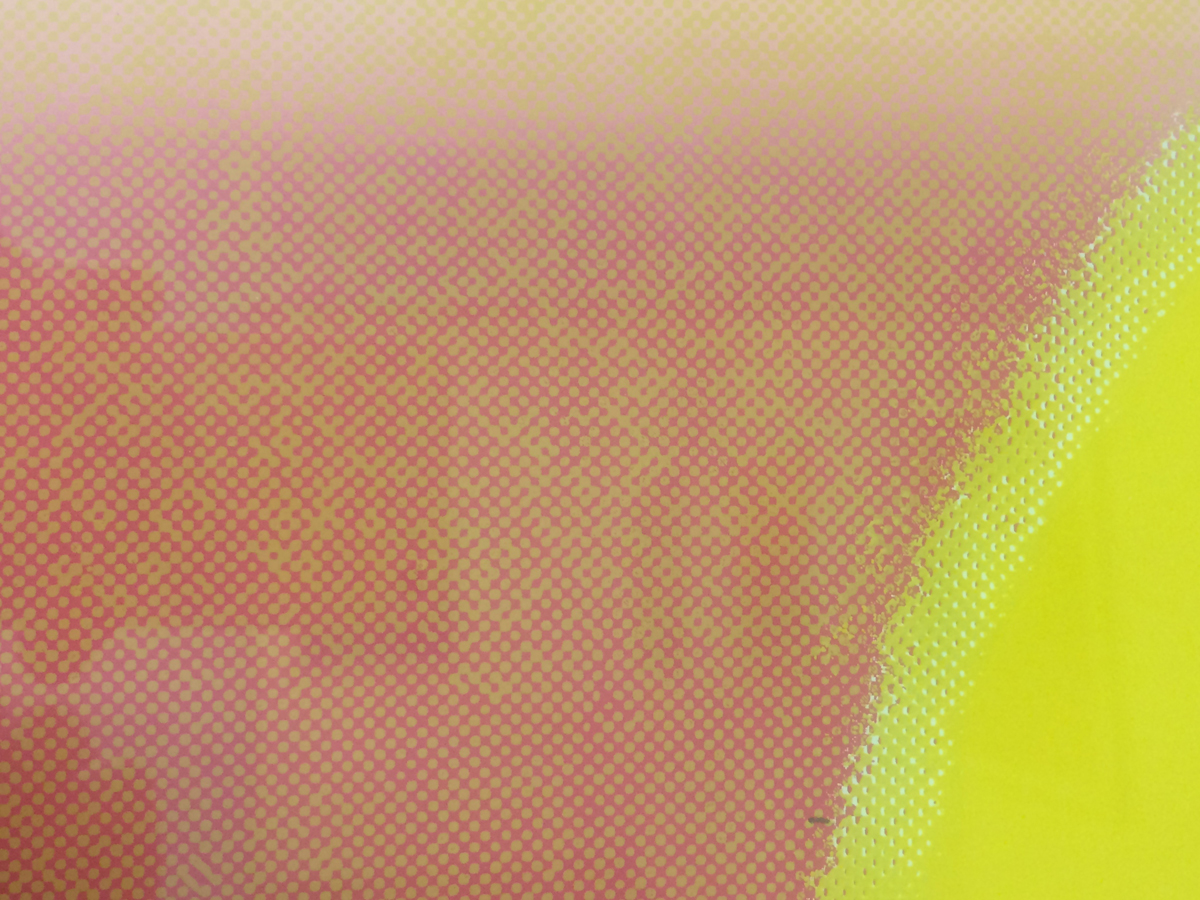 PRATO is located in the center of a dizzying array of travel temptations with destinations like Florence, Pisa and Bologna looming large along with the smaller lures of Lucca and Pistoia. If I didn’t have an anchor in the form of CCT-SeeCity, I would have been flying around the territory collecting a deck of train and public transportation tickets wanting to see everything now and all at once. My time in Prato would have consisted of a visit to the restored Filippo Lippi fresco in the cathedral, a bag of biscotti from Antonio Mattei, a slow dash over to Centro Pecci by bus and then, not knowing the existence of Pasticceria Nuovo Mondo, hopping on a train to Lucca like a ghost flying through the town and frightening the locals.

I arrived in Prato by train periodically waking up to dark views inside tunnel passages. As I stepped off the train with a sleepy face and a slow gait, I was almost run over by a burst of teenagers coming from inside the train, an unexpected sign of life. After finding myself miraculously in the backseat of an Ape Calessino being driven to my destination, I immediately realized I was riding past pastoral Tuscan views of rolling green mountains and slim cypress trees lining the roads like Etruscan columns all interspersed in a sprawling suburban terrain scattered between supermarkets, medieval walls, and parking lots. As the Ape Calessino slowly climbed up a residential hill, I saw a view of Prato in the distance framed by olive tree branches.

My first afternoon in Prato, I found the main cathedral closed and many shops also looked closed so I decided to go on a self-guided walking tour with the USE-IT Prato map. I ended up combining a route that would take me to an “ideal panoramic spot for romantic meetings” and “an enchanted waterfall hidden to most but not to the brave ones.” When I reached the panoramic spot, someone else was already there looking down at the view, a local Pratese guy out for a run. As I manically tried to take photographs of the olive grove trees and the city below with mountains in the backdrop, I found that the late afternoon sun was pointing straight into my iPhone camera like a headlight forcing me to take peripheral shots of some rain clouds on the right and olive trees on the left but not straight ahead.

The guy out for a run saw my pathetic situation and advised,

“You have to come back in the early morning when the sun is behind you.”

“Are you a photographer?” I asked.

“I take photos but not of Prato.”

“Is everything closed on Tuesdays?”

He then offered to identify all the sights. He pointed out a tower which I couldn’t recognize, told me the names of several mountains, and said that in the distance was Pistoia, the archenemy of the Pratese. I thought this is all great but I’m on a mission to a waterfall, to Rio Buti. I took out my USE-IT map and asked him how I could reach Via del Canneto, the road that led partway to the waterfall. He looked at the map and said he’d never heard of this road but maybe he’d seen it. However, he recognized Via Filettole and said it was the road below us. He saw that I had a guide to Prato in my bag and offered to recommend the best places. As he flipped through the book, he found one church I should visit that was beautiful on the inside but ugly outside called Chiesa di San Domenico.

His story went something like this. He had just finished his studies in Florence and was thankful he no longer had to take the train going back and forth everyday which he had been doing for five years. I could feel the drudgery of the commute in his voice and after experiencing it for the first time earlier that day, I had to admit it was a slow 20 minute train ride. He had studied law but wasn’t interested in criminal or civil which left only judicial but his voice sounded like he was still talking about the commute. Not knowing how to direct me to the waterfall, he pointed down an olive grove passage and then went on to do some judicial law. I experienced my first sunset walking down Via dei Cappuccini that day silhouetting street lamps and cypress trees.

Via Giuseppe Garibaldi became my entry point to the city center and I found myself walking frequently up and down this street. I must have passed by Pasticceria Nuovo Mondo several times before I saw a tray full of pastries in the form of a peach in the display window. But that wasn’t enough to make me stop and go in, I had to read about its celebrity status from the USE-IT map to go back and buy one. Coming from The Peach State (Georgia – USA), I felt like I had found the edible peach to my symbolic peach.

Although the state of Georgia is known for its peaches, I’ve never actually seen a peach tree. Living in the suburbs of Atlanta, the only place you’ll find a peach tree is on a roadside or highway signpost reading Peachtree Drive, Peachtree Boulevard, Peachtree Lane, Peachtree Street, Peachtree Center, Peachtree Plaza, Peachtree Circle, Peachtree Walk or Peachtree Road and the list goes on to total 71 variations of street names with the word “Peachtree.” As the name Peachtree was so common, I grew up actually ignoring peaches. I found the fruit cumbersome to eat and the peach pit incredibly ugly. The peach skin bruised too easily and had that strange fuzzy feel. The taste was simultaneously too sweet and too sour.

I took my peach pastry to the steps of Prato Cathedral and admired its cute shape. The peach was composed of two brioche buns in the shape of a mushroom top held together with yellow custard. The outside was glazed shiny and sprinkled with sugar and a small candied fruit acted as a stem. I took a bite of the pastry and was surprised by pockets of a red interior and a strong taste of alcohol which I later found out was Alchermes liqueur. The blend of yellow and red and the idea of the color of peach began to form my image of Prato as my past historical relationship with the word peach started melding with this present peach pastry.

The next day when I went to see Fabio Cavallucci’s inaugural and perhaps final exhibition at Centro per l’Arte Contemporanea Luigi Pecci entitled The end of the world, the color peach was on my mind. The exhibition played with the concept of time, compressing and then expanding our understanding of it so that as soon as you walked up the stairs, you were looking straight into the bewildered faces of two prehistoric ancestors mirroring your own curious expression. Mobile phones were encased in the latest geological crystal rock formations and knowledge of the built environment had progressed back to the hollow of a tree. Image series by Olafur Eliasson, Andy Warhol, and Hiroshi Sugimoto showcased horizon lines of rising, falling or absent sunsets. There were so many contemporary art superstars, pieces by Francis Bacon and Marcel Duchamp were relegated to a small corner.

I looked for artworks in the exhibition that alluded to the city or the region but the closest thing I found was a toy model of the Leaning Tower of Pisa on a shelf in Robert Kuśmirowski’s Quarantine. The only thing that reminded me of the Prato I had seen and experienced came from the colors of Andy Warhol’s Sunset series, specifically the yellow and red version, in the colors of the Peaches of Prato, the cutest pastry I had ever seen.

More about Prato and its trees in Johanna Juni Lee’s blog:

The Leaves and Trees of Prato 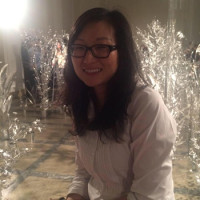 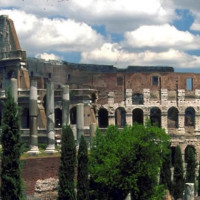 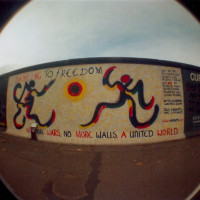 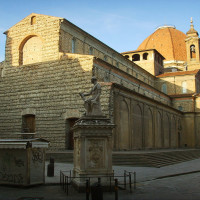