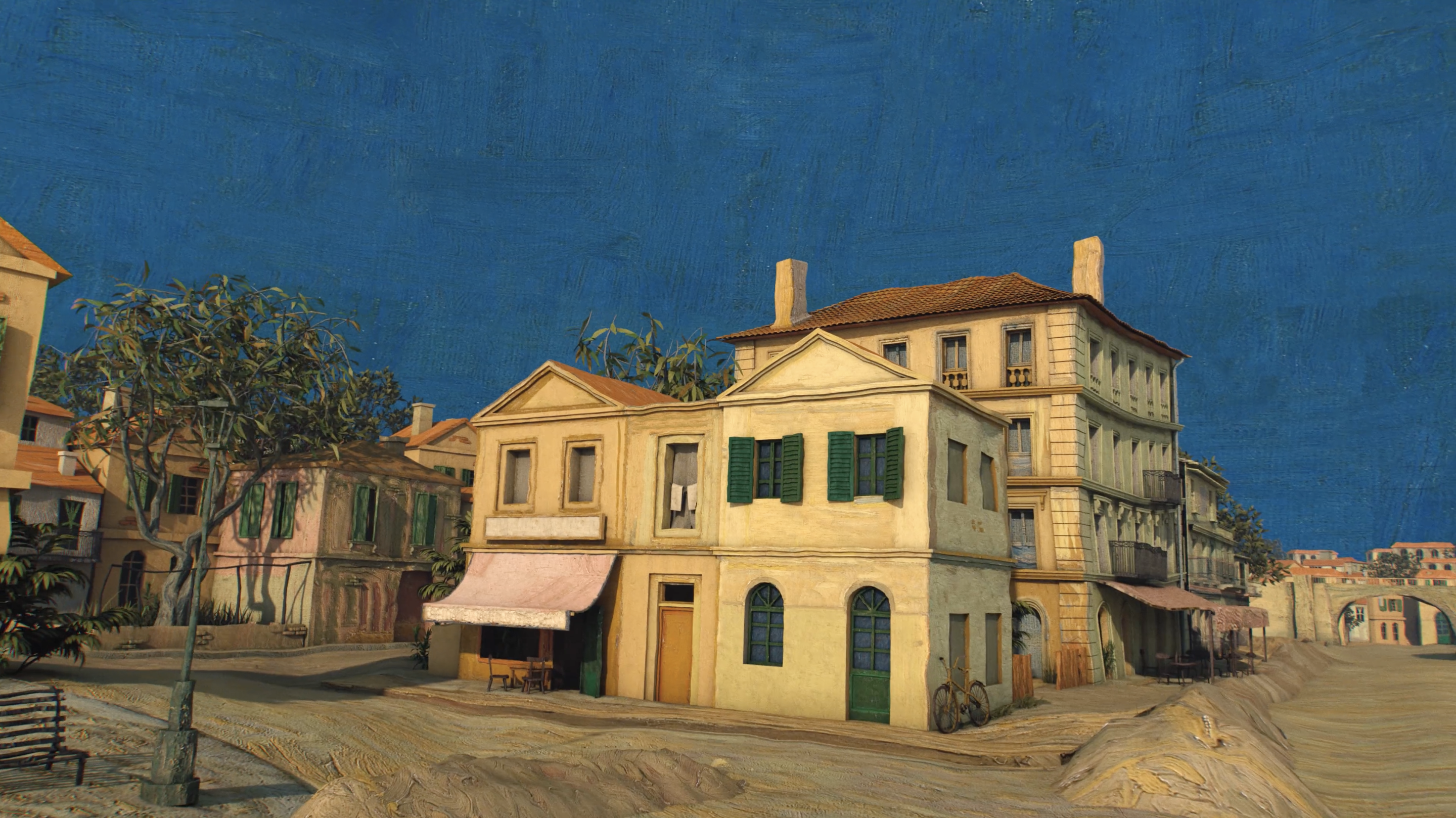 No Blue Without Yellow - Maciek Janicki

The short film opens luring closer and closer to discover the possibility of stepping inside a fantastical sphere. The observer is slowly drifting into Van Gogh’s world, carried by the rhythm of a waltz. Vincent Van Gogh’s memories are sculpted within his paint strokes. His memories are alive within the film, but just for a fleeting moment. The fantasy lasts simply two minutes, but within that short time the observer is immersed in a painters lifetime. Director Maciek Janicki (multi disciplinary artist specializing in film, animation and illustration) explains: “I constructed No Blue Without Yellow using individual paintings from consequential times of Van Gogh’s life and sculpted them in three dimensional space. I sampled hundreds of the artist’s brush strokes to wrap my interpretive world within his paintings.”

More about the Short Film…

Vincent Van Gogh (1853-1890), renowned for his emphatic style of art, truly saw his life through the colours and textures seen layered in his life’s paintings and described in his many letters and diaries. Inspired by the imaginative world of Van Gogh, ‘No Blue Without Yellow’ – a short film by Maciek Janicki – offers an emotive tour through the world Van Gogh saw and captured in his paintings, swirling into an immersive documentary style film of the artist’s perspective.

The film opens luring closer and closer to discover the possibility of stepping inside a fantastical sphere. The observer is slowly drifting into Van Gogh’s world, carried by the rhythm of a waltz. Van Gogh’s memories are sculpted within his paint strokes. His memories are alive within the film, but just for a fleeting moment. The phantasy lasts simply two minutes, but within that short time the observer is immersed in a painter’s lifetime.

The story begins within the artist’s childhood, flowing through the windy leaves and thatched roofs, immersed in the artist’s early beginnings before the his allegorical bright and rich colours. Breaking through a Dutch window into Paris, France, where the artist’s eyes began to adjust to his signature tones and subjects. The light and long shadows shift into a 1888 night cafe, the artist described as “to show the terrible passions of humanity by means of red and green.” This is the space where pigments were given feelings and emotions. 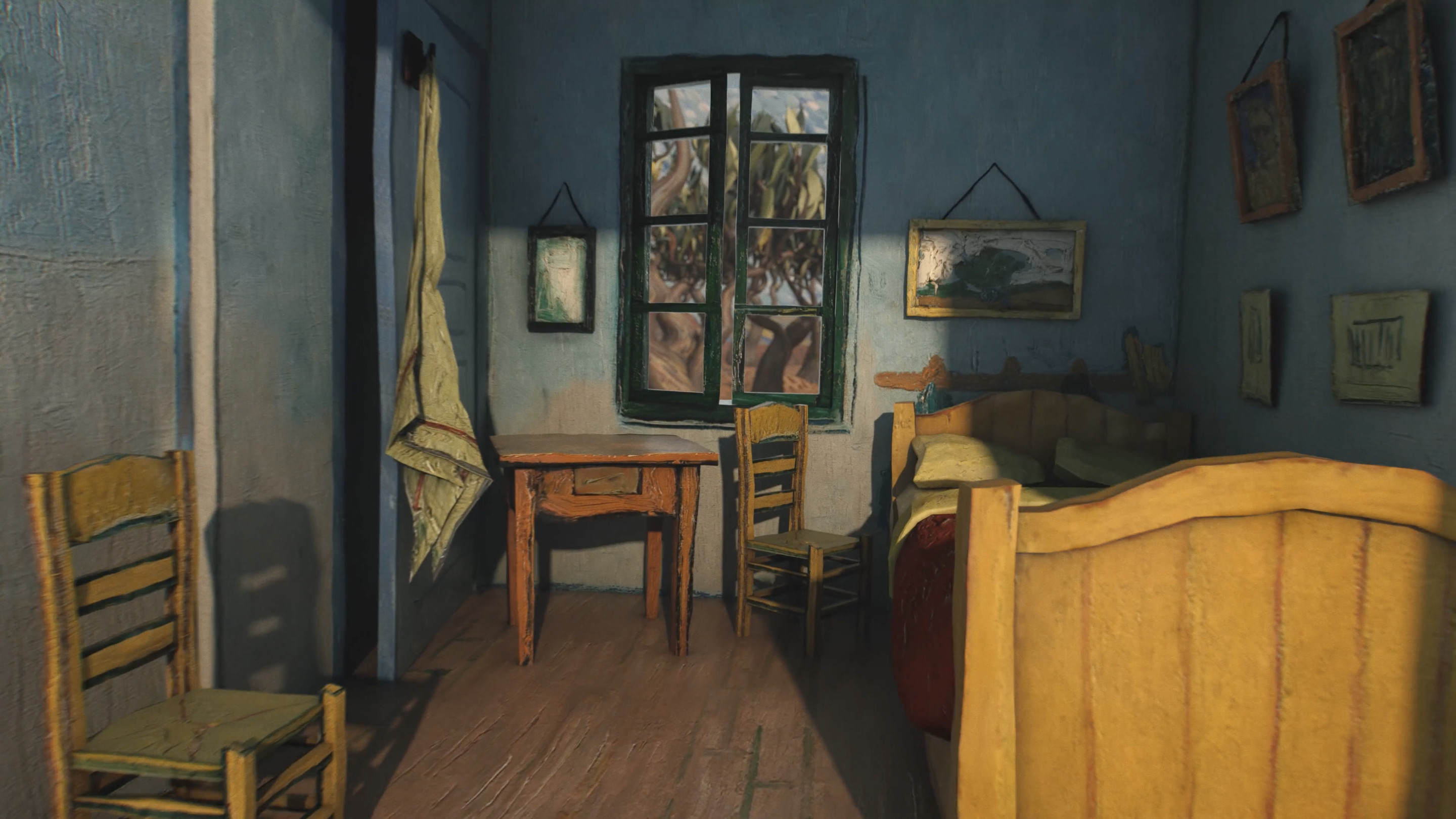 Onto Arles, France, the vista swoops through wheat fields of yellow and green and turquoise blue. The signature yellow takes center stage, self professed as Vincent’s symbol for comfort and hopefulness. Settling into the Yellow House, the setting where the majority of artwork was complete, the viewer lands in the place where colour was the artist primary obsession and sole emotional outlet. In his letters to his brother, Van Gogh wrote:

“I live in a Yellow house with a green door and green blinds, whitewashed inside… red tiles on the floor – the house in full sunlight – and over it an intensely blue sky….”

He writes of his room:

“The walls are pale violet. The floor is red tiles. The wood of the bed and chairs is the yellow of fresh butter, the sheets and pillows very light greenish citron. The cover scarlet. The window green. The toilet table orange, the basin Blue.”

Experience and colour are one. The camera continues through this perspective, taking the viewer to the final places of the artist’s experiences, in which landscapes become more blue and looming. The final scene serves as a visual epitaph. Illustrating two weeks before the artist’s death, the presence of the crows and contrast of Van Gogh’s symbolic colour’s of blue and yellow paint, shows the emotions of final days.

The blue of suffering and yellow of peace, and the music set in G Minor. Janicki constructed No Blue Without Yellow using individual paintings from consequential times of Van Gogh’s life and sculpted them in three dimensional space. He sampled hundreds of the artist’s brush strokes to wrap Janicki’s interpretive world within his paintings. Each element develops Van Gogh’s experiences, a world rooted in a reality outside of the world he lived. 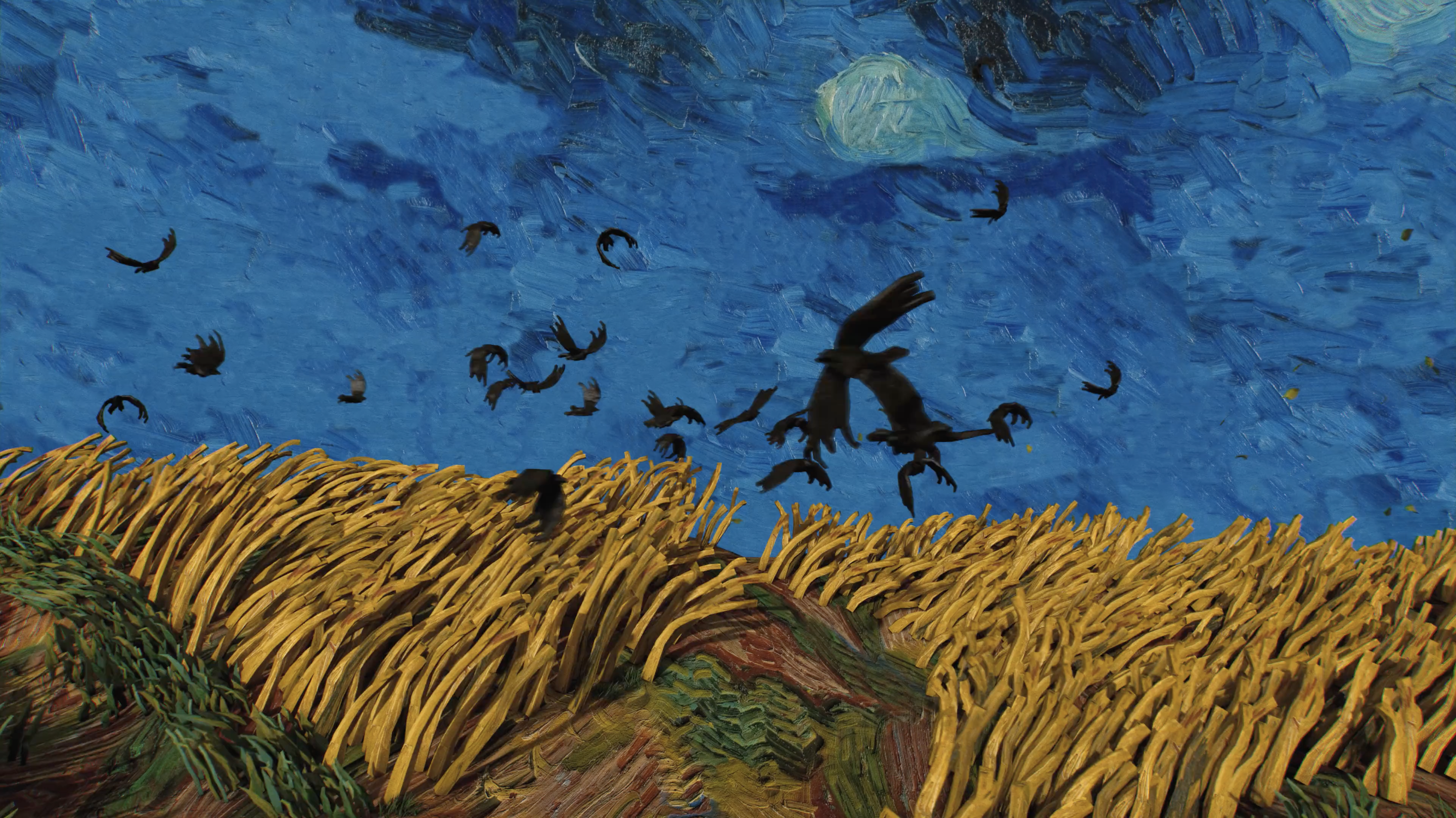 And about the Director…

Maciek Janicki employs drawing, animation, painting, film, music, and design to realise imagined city scapes and the intersection of people within it. From an early age, his love for skateboard culture formed his style and concepts behind his work. Inspired by city scapes and how skateboarding coexists within the architecture, his work developed to reflect and pursue the simplicity of function and geometry within these ecosystems. Also exploring imaginary and fantastical figures that might lay within the city, his work becomes a highly satisfying peek into his surreal imaginationary metropolises. Janicki’s work is a reflection of magical dimensions, going beyond reality and materialized by concepts design, shapes, and small details. Janicki’s projects include working with Disney, The Van Gogh Museum, AMC, Redbull, Suzuki, Quicksilver, Coca-Cola, Slam City Skates, and Microsoft. His work has been exhibited in cities throughout Europe, Asia and South and North America, including The Exploratorium, San Francisco, Japan Media Arts Festival, Tokyo, Milano Film Festival, Italy, Illustrative Film Festival, Berlin, Germany, Hong Kong Arts Center, Hong Kong, amongst others. He co-owns and acts as Art Director of the skateboard company 79th. Janicki was born in Poland and lived and worked in London, United Kingdom for 8 years. He is now based in sunny San Francisco, CA. | www.maciekjanicki.com 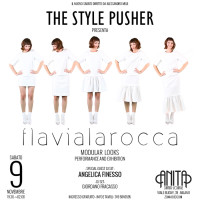 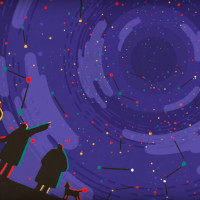