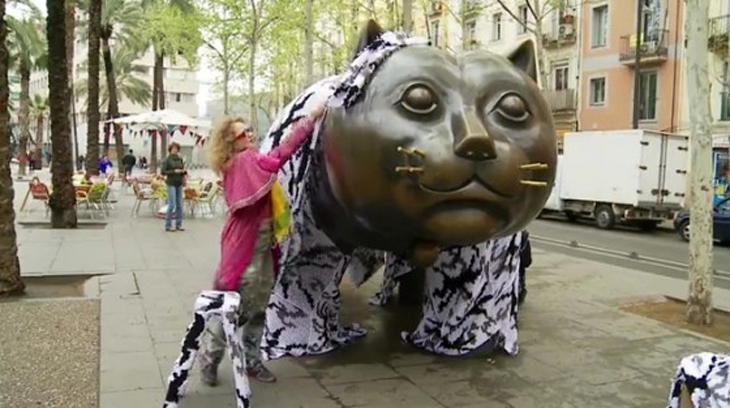 GATO A GATA | OLEK IN RAVAL | BOTERO COVER from mydogispolite on Vimeo.

ABOUT OLEK: Olek was born Agata Oleksiak in Poland and graduated from Adam Mickiewicz University in Poland with a degree in cultural studies. In New York, she rediscovered her ability to crochet and since then she has started her crocheted journey/madness. Resume sniffers may be pleased to know Olek’s work has been presented in galleries from Brooklyn to Istanbul to Venice and Brazil, featured in “The New York Times”, “Fiberarts Magazine”, “The Village Voice”, and “Washington Post” and drags a tail of dance performance sets and costumes too numerous to mention. Olek received the Ruth Mellon Award for Sculpture, was selected for 2005 residency program at Sculpture Space, 2009 residency in Instituto Sacatar in Brazil, 2010 AAI Lower East Side Rotating Studio Program, and is a winner of apex art gallery commercial competition. Olek was an artist in an independent collective exhibition, “Waterways,” during the 49th Venice Biennale. She was also a featured artist in “Two Continents Beyond,” at the 9th International Istanbul Biennale. Olek herself however can be found in her Brooklyn studio with a bottle of spiced Polish vodka aggressively re-weaving the world as she sees fit. [oleknyc.com]

I was born in Rennes, France, in 1978. After being graduated with a master degree at the ESAV, the cinema school of Toulouse in France, I started to work in Bilbao in Spain as a freelance cameraman and video editor. During 6 years I worked for the travel program CHILOE for the public basque television EITB in the production of 47 shows filmed in 25 countries around the world. During this time, I was also working for the main film festivals of Bilbao and San Sebastian (Zinebi, Fant and Zinemaldia). Now I live in Barcelona working as a freelancer for different production companies and for my own projects.
Website 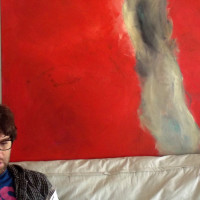 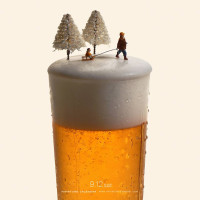 Miniature Calendar: a world where beer foam is snow and broccoli are trees

WHO ART YOU? 5 | The Rebirth – International Contest for Emerging Artists