PALERMO I find myself for the second time in Sicily. After Catania a year ago, I finally land in the capital. I was told “you’ll fall in love with Palermo, it’s a unique city” and so I came here full of curiosity. Palermo is in fact a city that encompasses a thousand worlds. From here tens of different peoples have passed through the centuries: Byzantines, Arabs, Normans, Spaniards, each with its own traditions, each leaving an indelible mark in this land where today you can breathe all the richness and variety of its long history.

My exploratory walk in Palermo then starts with the discovery of a city that I have long wanted to visit. As soon as I arrive I find myself at Porta Nuova, which marks the beginning of the very long Via Vittorio Emanuele. A straight road, which cuts the city in two and reaches the sea. It’s the oldest street, now partly pedestrian and very touristy, where there are shops selling typical products, handicrafts and some of the city’s major attractions. 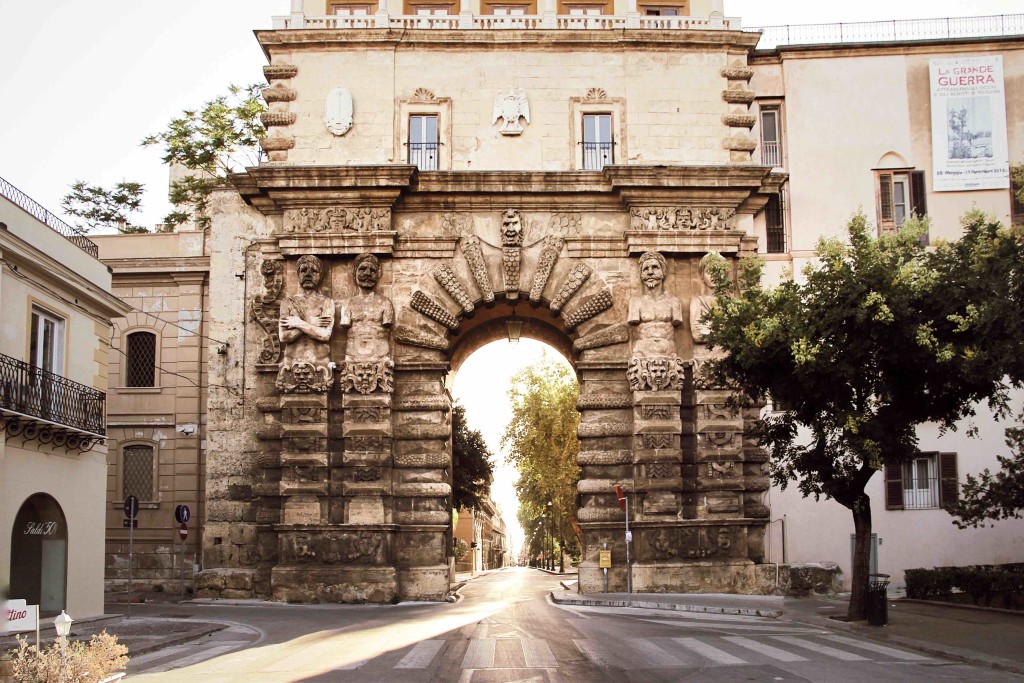 I almost immediately glimpse the Cathedral so majestic and imposing that it looks more like a fortress than a church. In this building we read the history of Palermo: built starting from the twelfth century, after a strong earthquake, but already previously a place of worship since the early Christian era. It was a basilica and then a mosque, only to return to being a place of Christian worship with the arrival of the Normans. Its history continues in the following centuries with continuous enlargements and renovations until it becomes a mixture of architectural forms and styles. 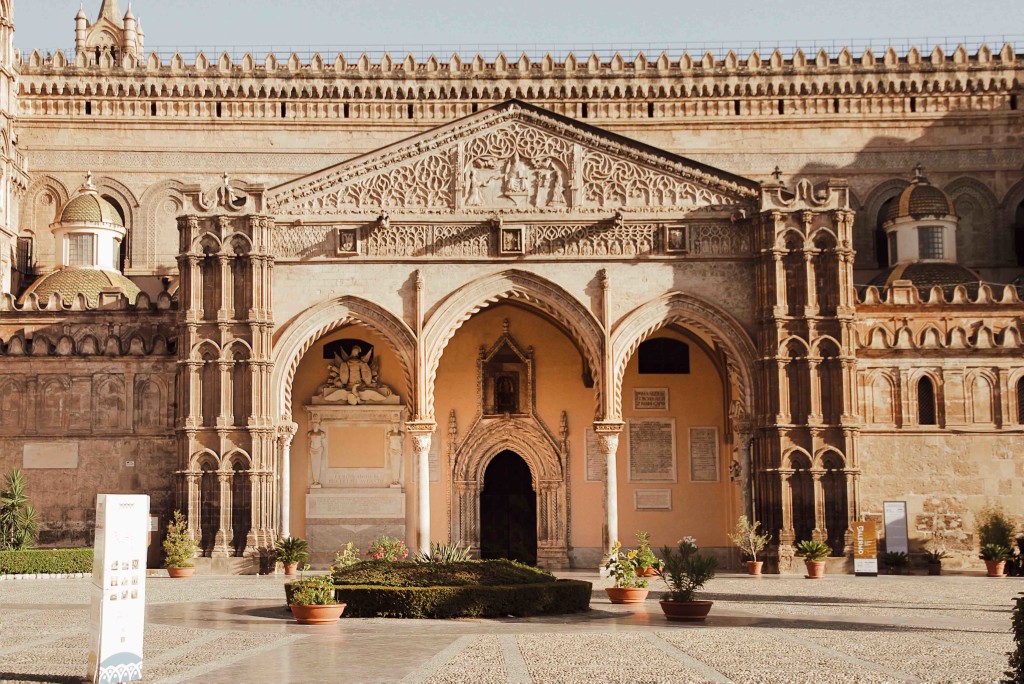 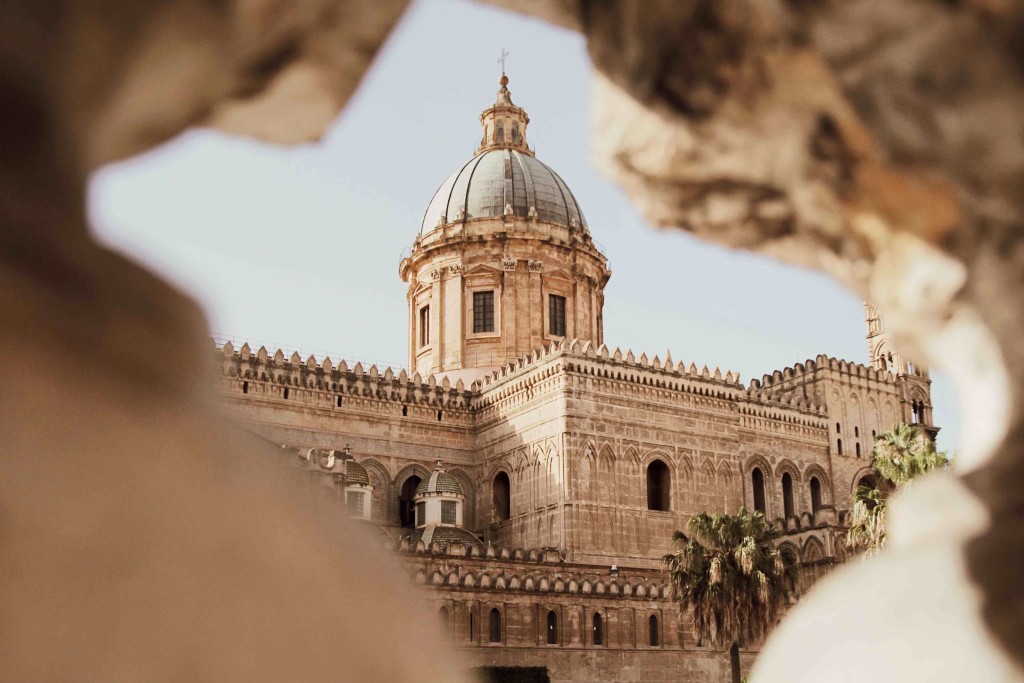 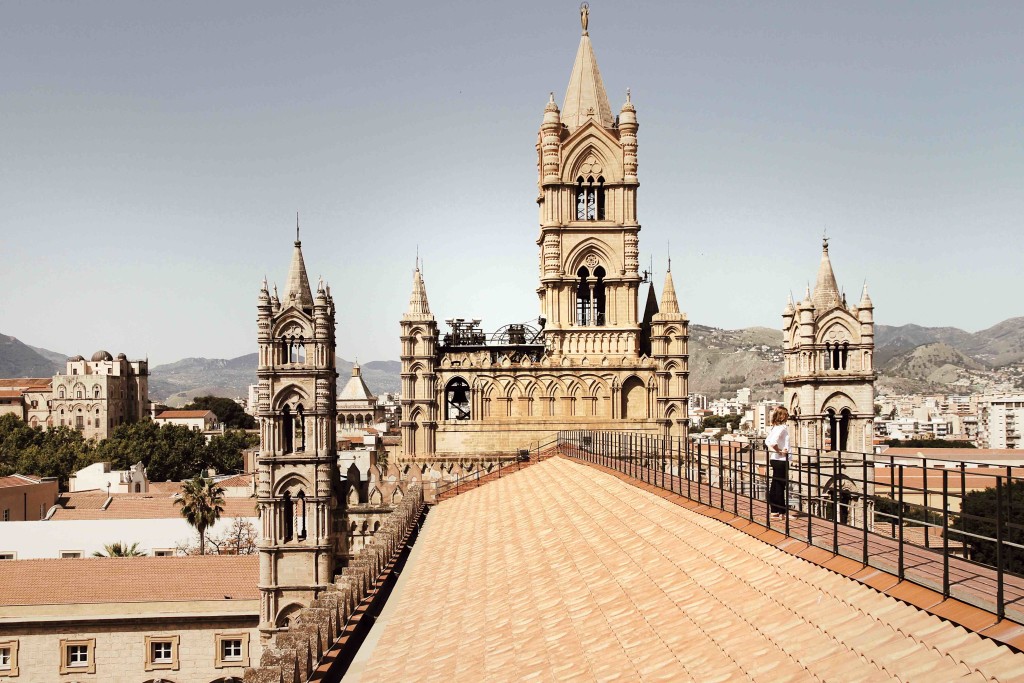 Continuing to walk along Via Vittorio Emanuele, I arrive at the intersection with Via Maqueda. Here are the Quattro Canti: an octagonal square, bordered by four richly decorated buildings. 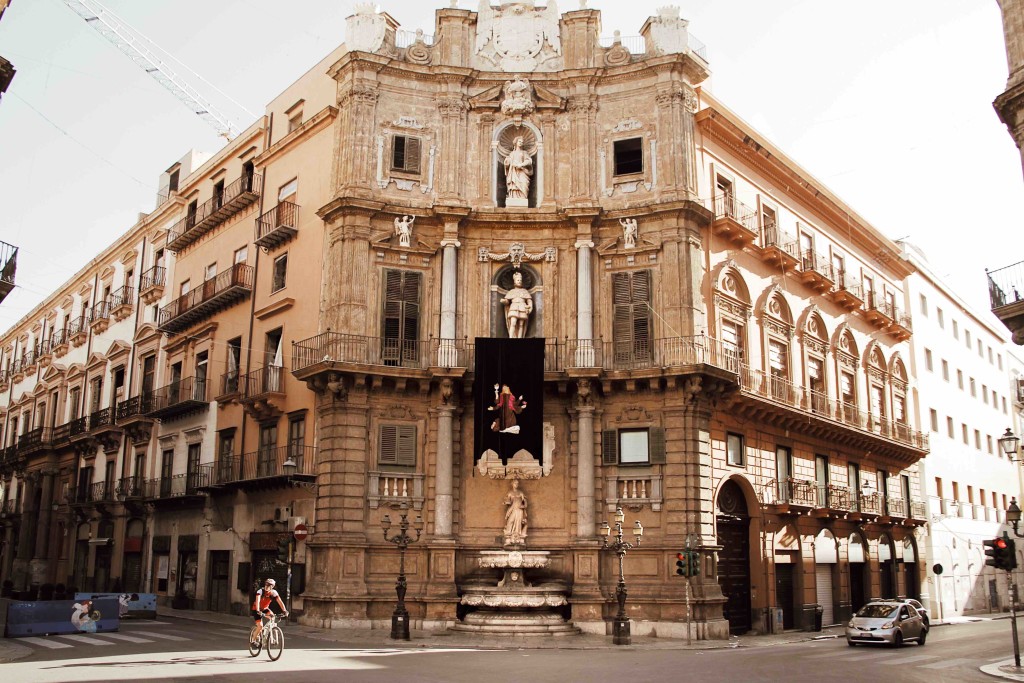 But Palermo surprises above all for its mixture of beauty and decadence. I just take a few steps to get to the famous Fontana Pretoria, a monumental fountain made up of dozens of Carrara marble sculptures. In the background (and just in front of the representative office of the City Council of Palermo) there are some ruined baronial buildings. 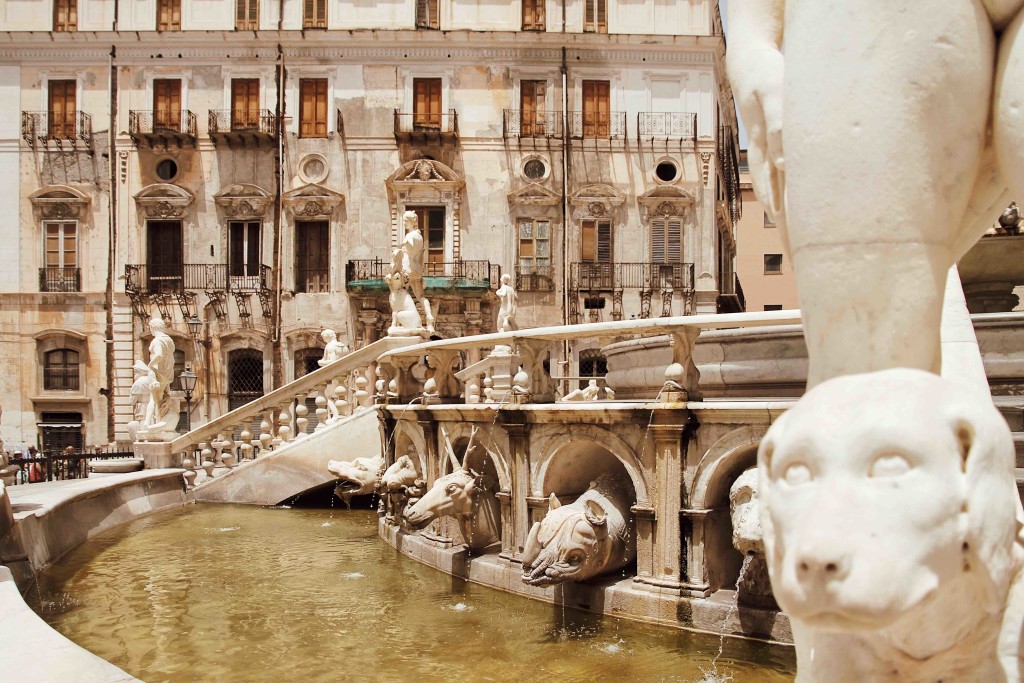 Another example of how beauty here manages to merge with decadence is the Museum of Majolica. I was particularly struck by this place: I never expected, seeing the building from the outside, to find so much splendour inside. In this house-museum you can admire one of the largest collections of majolica in Europe. Eight rooms whose walls are entirely covered with tiles of various origins and times. The visit lasts about an hour but here I would have spent the whole day studying the more than 5.000 tiles, each one different from the other, and observing all their decorative details… 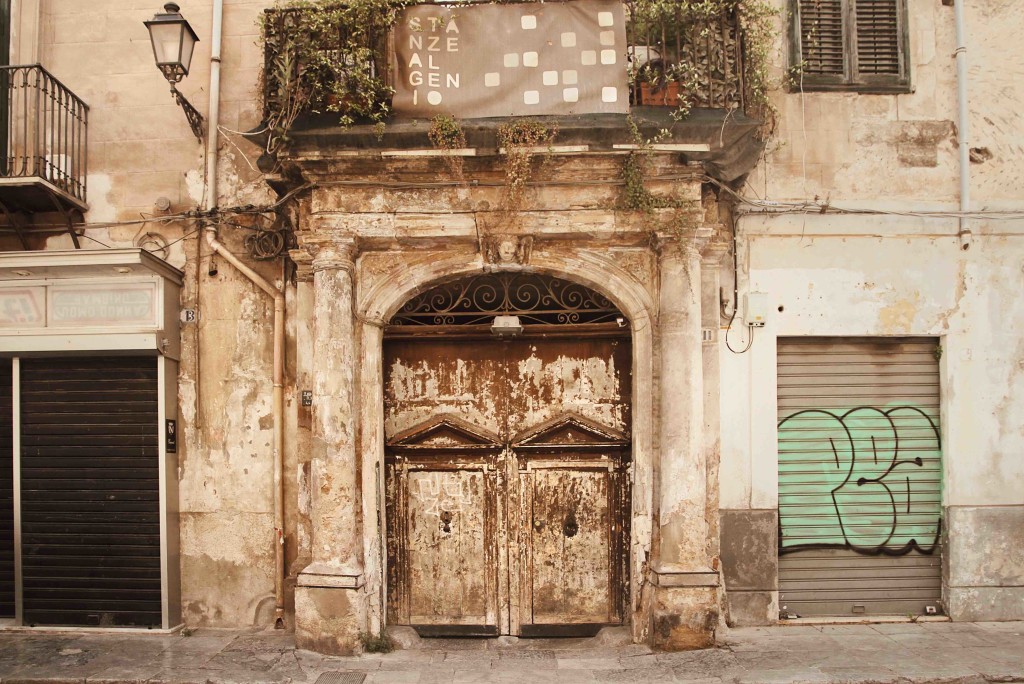 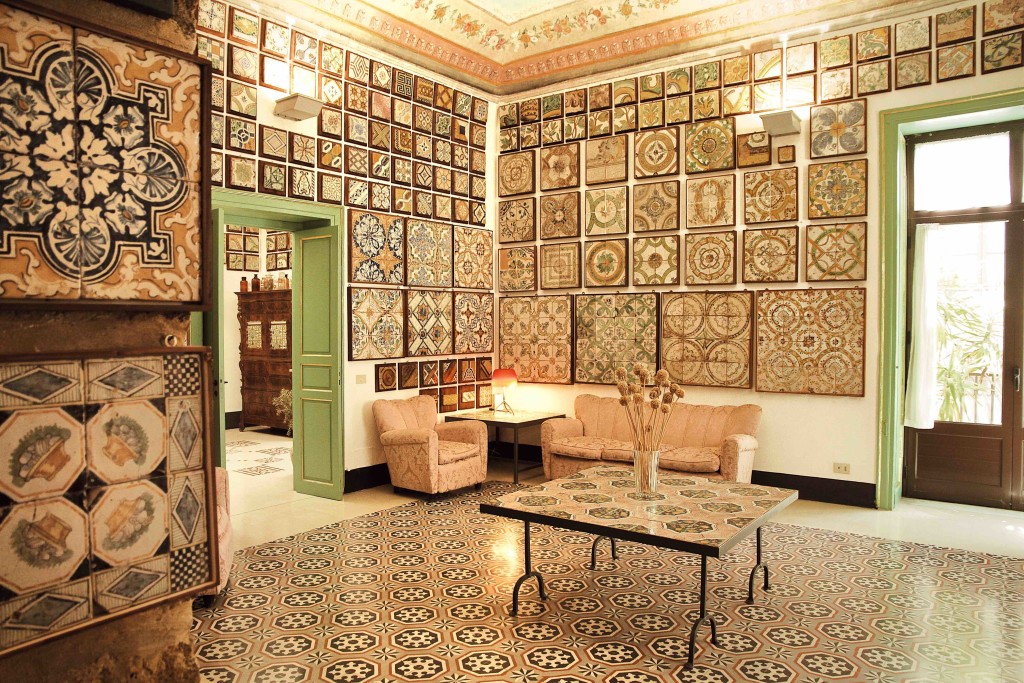 But to admire all the beauty of Palermo, it is necessary to devote some time to its countless churches, scattered throughout the city center. There are the baroque ones like Santa Caterina and the Chiesa del Gesù that amaze for their wealth of marble decorations, stuccos and frescoes. 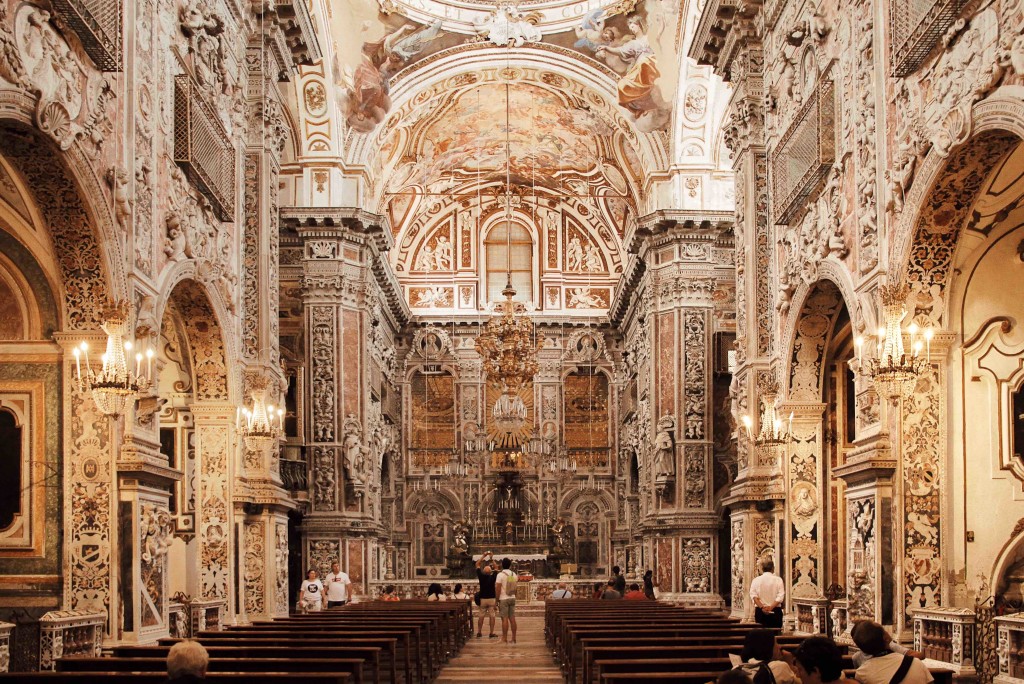 Entering one of these churches means getting lost to admire the opulence of the decorations that uninterruptedly cover the interior, from the floor to the ceiling.

Then there are the Martorana and the Cappella Palatina, two of the unmissable places, symbol of Palermo. These two churches are part of the Arab-Norman itinerary (from 2015, the fifty-first Italian UNESCO site) that includes various monuments in the historic centre of the city, plus the Cathedrals of Cefalù and Monreale: places that bear witness to a unique period of its kind, exclusive of this land, the union of two opposing worlds, the Arab-Muslim and the Norman-Catholic worlds. 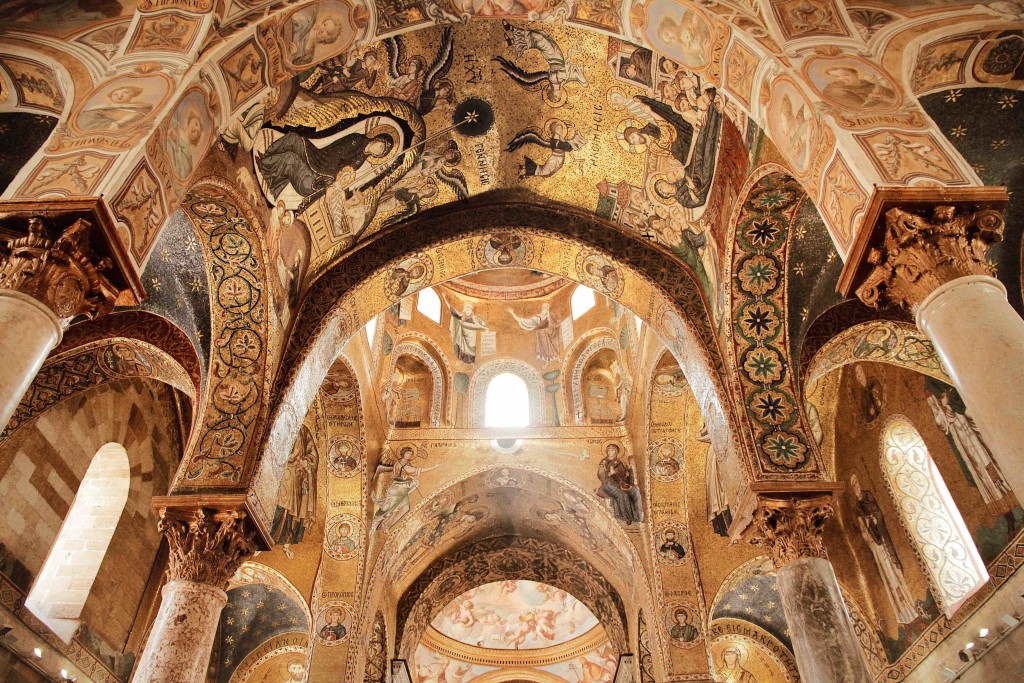 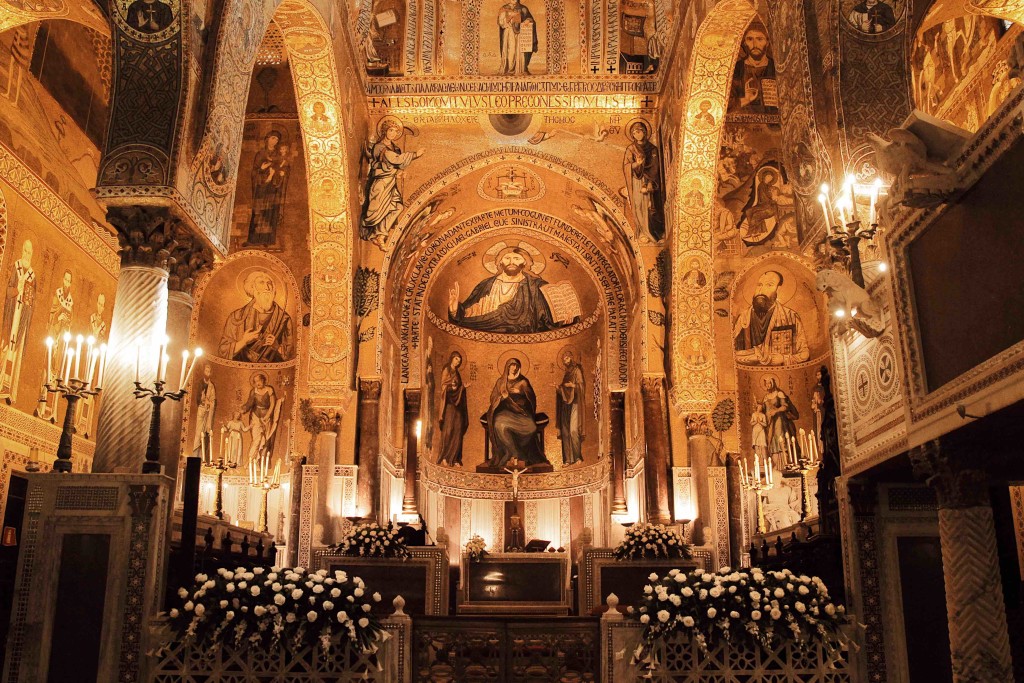 Continuing my tour, I soon realise that Palermo is not just made of great monuments that enchant for their magnificence. Yes, Palermo is mostly made up of neighbourhoods, which tell the true story of the city and its inhabitants.

Leaving the main streets to go into the side ones, away from the most beaten tourist flows, initially, could put a little bit uncomfortable… Anyway, I push myself into one of the streets leading to Ballarò, between the alleys made of dilapidated houses, decrepit walls and street art works ruined by time.

I look at the faces that scrutinise me because it is obvious that I’m not a local, but soon that initial hesitation disappears, to make room for amazement. Palermo is a beautiful and decadent city, with some colourful corners of modernity that surprises you.

From Ballarò I move to Il Capo, where the fascination of decadence sometimes leaves ample room for degradation. In this historic district, the streets resemble the path of a labyrinth and getting lost seems very easy. 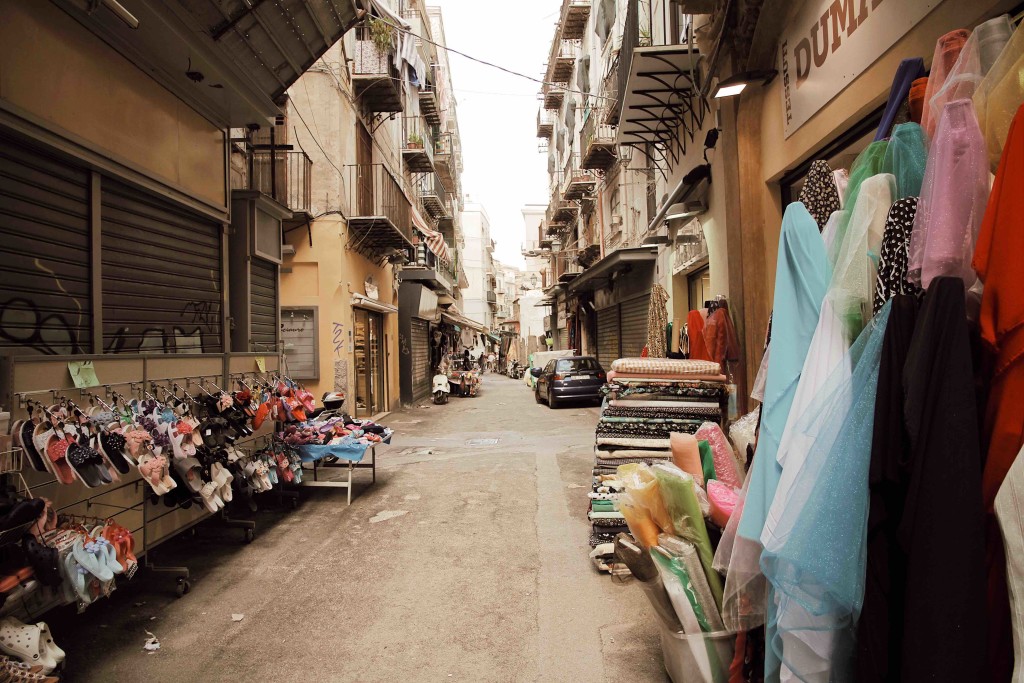 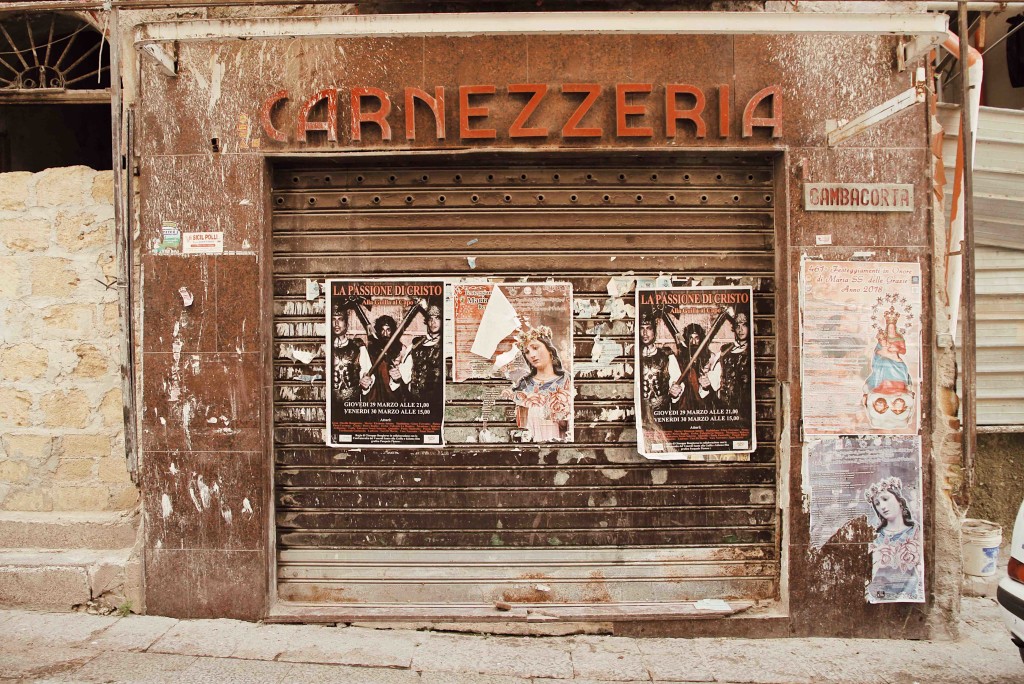 Going along Via delle Cappuccinelle to the end, in a moment I arrive at Vucciria. Here once stood the historic market of the city, which inspired the famous painting by Guttuso. Today there is a little market left: the stalls of fruit, vegetables and fish that still exist, are mixed with bars and clubs that have made this area one of the busiest at night, known especially for street food and street art. 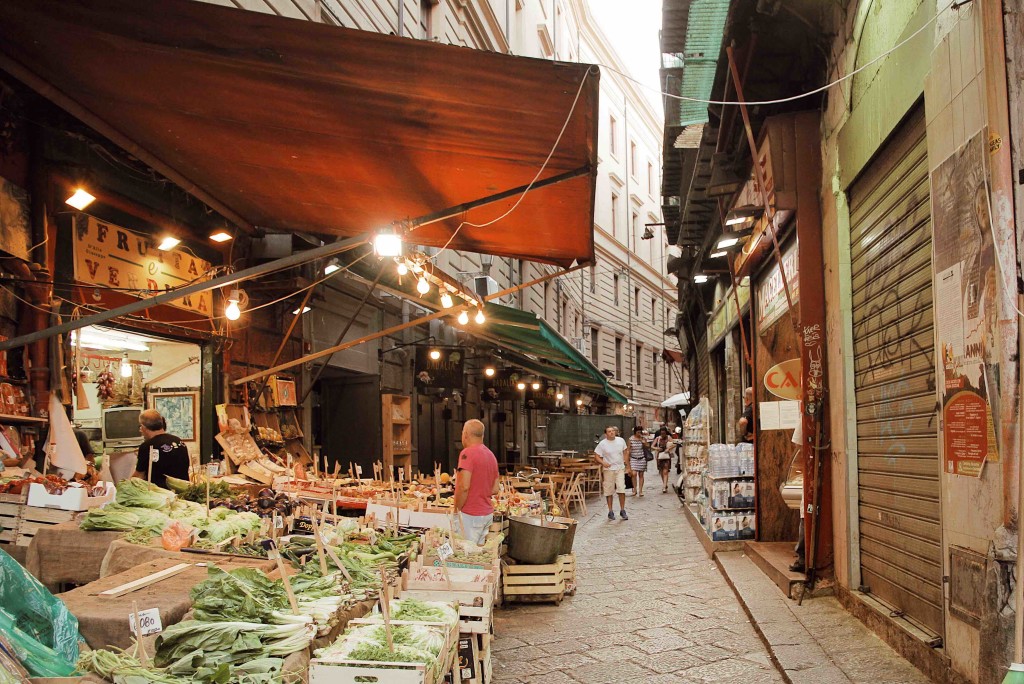 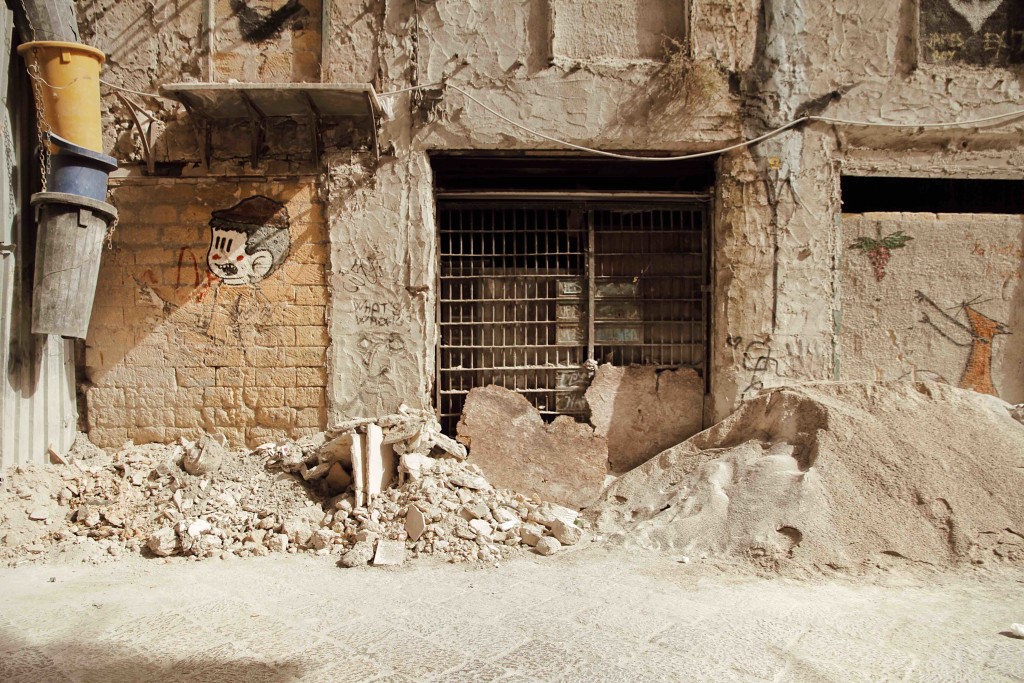 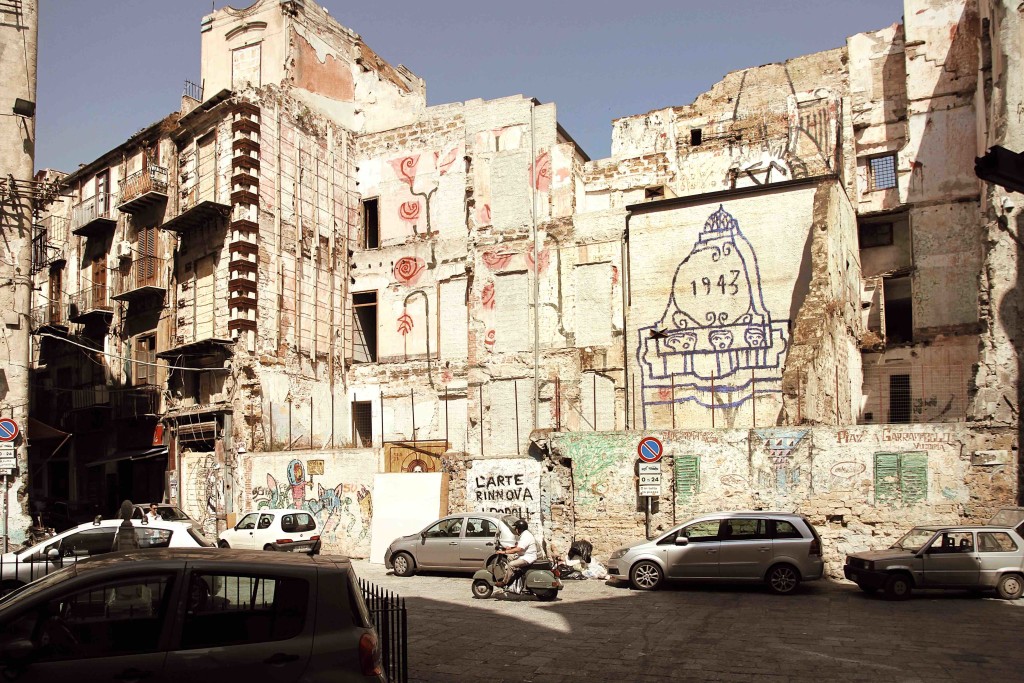 But it is really worth going into the heart of the neighbourhood, even during the day: some streets seem to have come from another era. Here we see the signs, still evident, of the bombardments of the Second World War, buildings destroyed, abandoned and never rebuilt.

From Vucciria, crossing Via Vittorio Emanuele again, I soon find myself in the Kalsa heart, the last stop on my tour in Palermo. This ancient neighbourhood arose in the tenth century during the Arab domination. Walking through its streets, I realise I’m in a different place from the other neighbourhoods, almost a small town in itself where you breathe a new air of change. 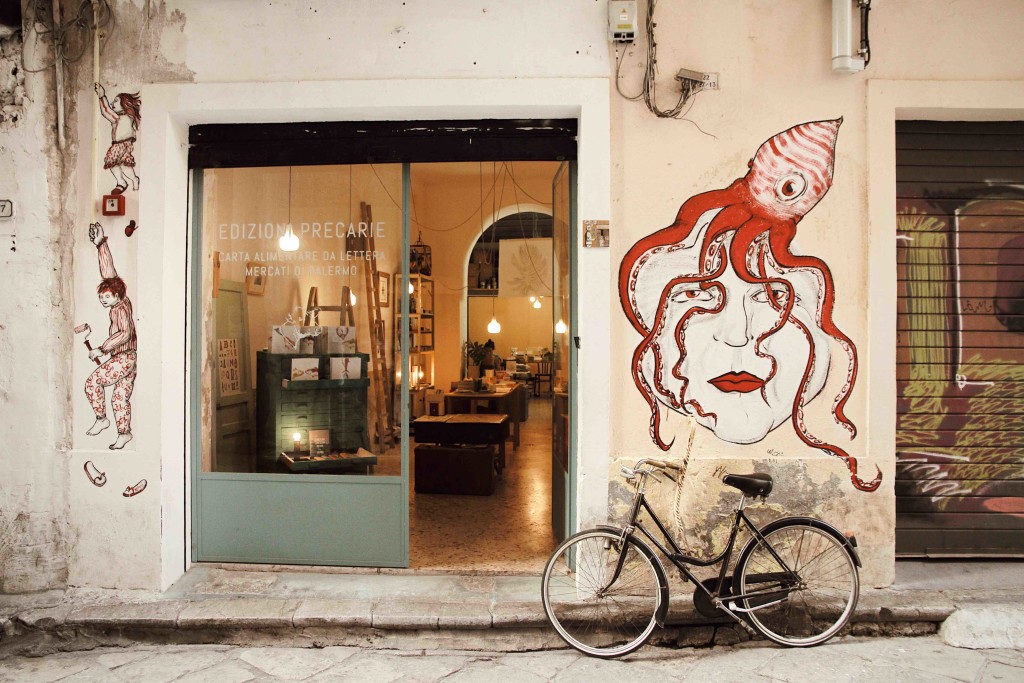 The typical decadence of the popular neighbourhoods is mixed with the desire for renewal. Along the streets there are many local craft shops run by young people, creatives and entrepreneurs, who have decided to establish their business here, perhaps after having spent an period fuori – “out” meaning abroad. There are flea markets that sell vintage clothes and modern items, bookstores where you can buy books that can not be found anywhere else, small art galleries and places with alternative furnishings. 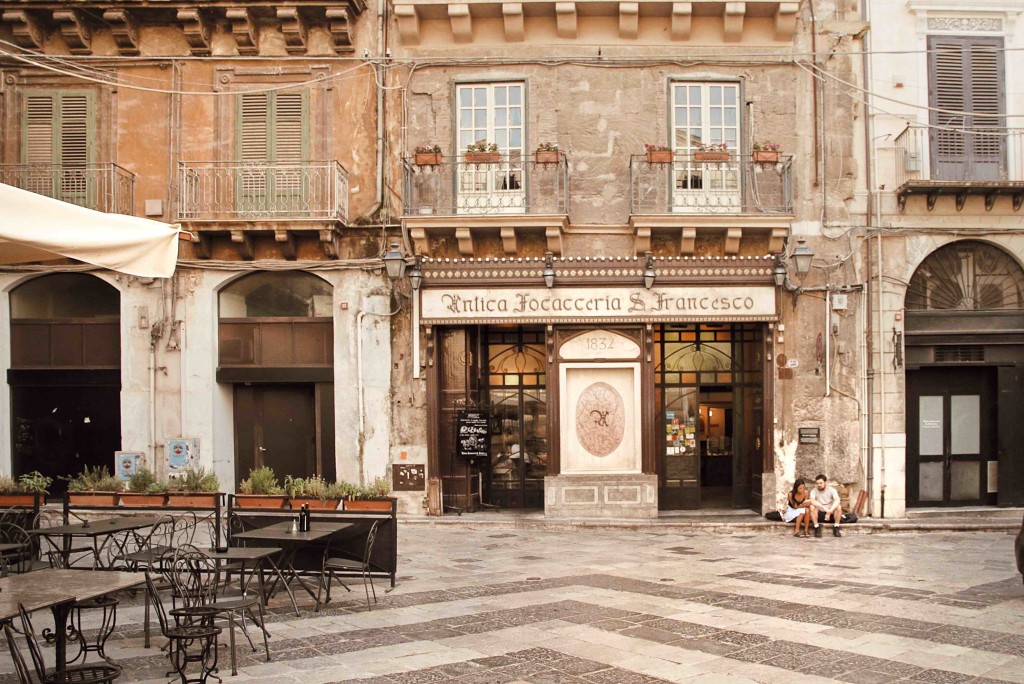 My walk ends here. I already knew that three days would be too short. I’ve seen a lot of Palermo, but the city seems to be an endless trunk of things to discover. Each neighbourhood embodies a small world to be explored calmly, walking along the streets and admiring the city in this particular and fascinating mixture of beauty and decadence. See you soon, Palermo! 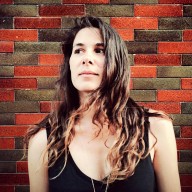 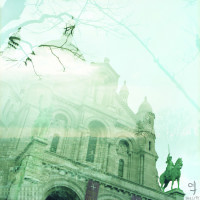 UNESCO: Italy at the top of the World Heritage List 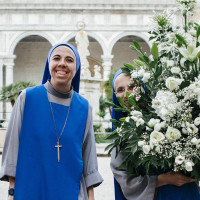