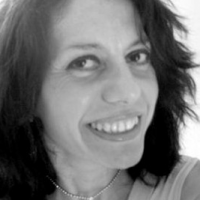 I'm a poet and short story writer from Nicosia, Cyprus. I've published three collections of poetry: The Voice at the Top of the Stairs (2001), Cleft in Twain (2003) and 25 Ways to Kiss a Man (2004). In addition to two books of short stories, Ledra Street (2006) and Girl, Wolf, Bones (2011), I have had work published online and in journals in the UK, the United States and elsewhere. I've also won prizes and commendations in international competitions, including the Commonwealth Short Story Competition and the Seán Ó Faoláin Short Story Prize. I've appeared at international literary festivals, among others: Frankfurt Book Fair 2007, Poesiefestival Berlin 2010 and Dresdner Bardinale 2013. My work was included in Best European Fiction 2011 (Dalkey Archive Press) and Being Human (Bloodaxe Books, 2011). I've recently written a short play "Mermaid" which was performed in London.
WebsiteFacebook