LONDON Let’s try to guess how this night glimpse of Waterloo Bridge, from Victoria Embankment, with a timid moon between the London Eye profile and the Big Ben Clock both illuminated, was drawn. Would you say it was painted with an iPad? It’s called “new media art” and this term includes all the artworks created with the support of digital technology, then even iPhones and iPads. Somehow, artists must deal with the digital/virtual world as it’s becoming every day more important for everyone’s ordinary real life. It means not only to create a Facebook Fan Page and share the own works on Flickr or other socials. It also means to understand how to use technology for creating Art, like it normally happens with Music for instance. I was curious to know more about this new mobile and internet-orientated approach, so I interviewed the author of the above “iPainting”: Nadja Ryzhakova, a young Russian-born London-based “iPad artist”.

When did you start “iPainting”, Nadja?  I made my very first iPad drawing with one of the free finger drawing apps after I saw David Hockney’s “A Bigger Picture” at the Royal Academy of Arts in 2012.

At the exhibition I was captivated by a room with at more than a metre high colourful landscapes going from wall to wall and from floor to ceiling. Each of landscapes was dated in a chronological order with enviable for an artist frequency. I was wondering how it is possible for a painter to create nearly an artwork a day at such scale and quality?! I was totally hooked up by the fact that all of them were made right there on the spot with an iPad. On the same day after the exhibition I downloaded a free hand drawing app and made my very first iPad drawing. This was the beginning of my new journey. 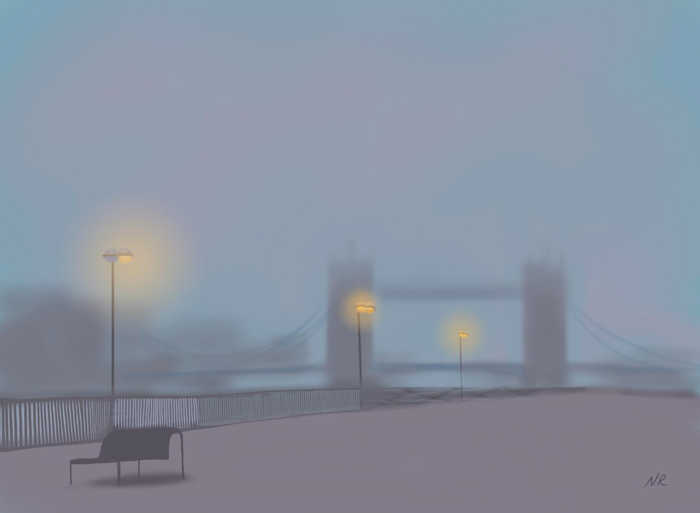 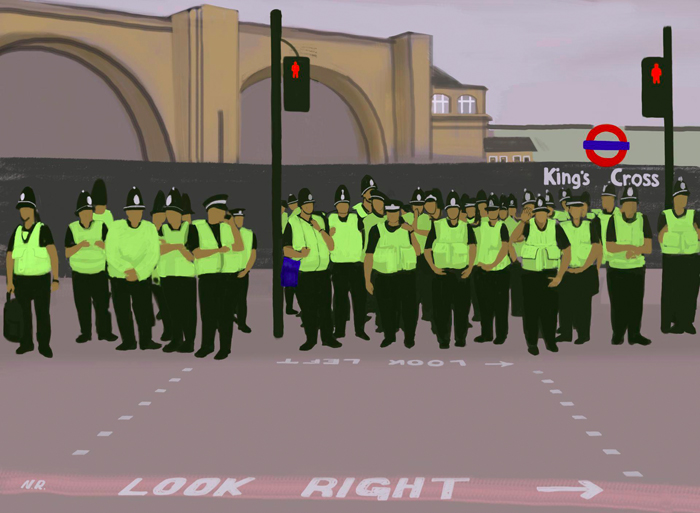 How long does it take you to draw one? The time I spend on a drawing varies. It depends on the goal, character of a drawing and even inspiration. Some drawings take minutes to create, some hours and days. But I believe that the character of drawing on mobile devices with finger painting applications dictates “alla prima” approach. In other words, quick sketches conveying first impression, rather than finished ‘masterpieces’. From my perspective, the attempt to substitute traditional mediums such as drawings and paintings with iPad drawing is pointless. It is another esthetic, which is something in between drawing/painting and photography and it calls for seeking out new styles and languages. 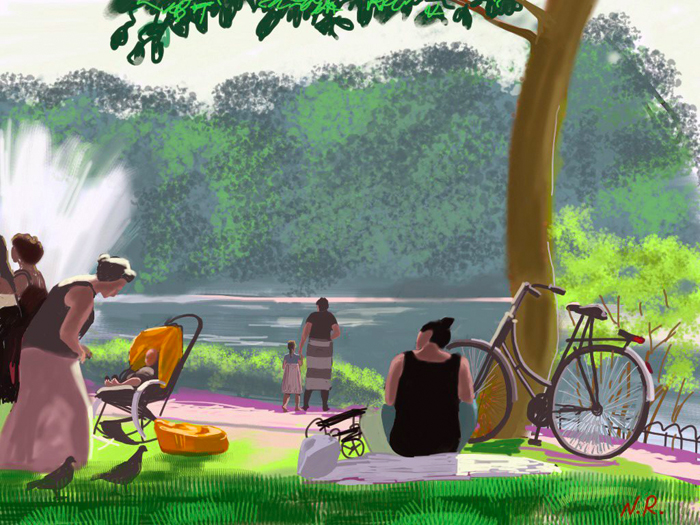 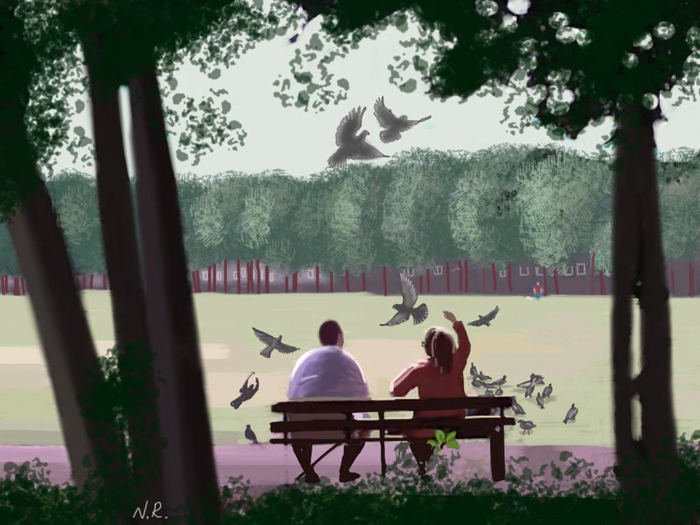 What do you use for iPainting? Just your fingertips or other instruments? What’s your technique? Since I started drawing on the iPad, for very long time I was drawing with my fingertips only. I was experimenting and learning the creative boundaries of an iPad. Some of my first drawings are detailed and realistic. For instance “Thomas”, a very realistic drawing on my cat against absolutely plain background. I was challenged to recreate the texture of cat’s fur, its softness. To achieve such effect with the fingertips only was possible because of the ability of the finger drawing/painting app to zoom in. I would probably still be drawing with fingertips only, but a few months ago I had to create a series of drawings for a commercial project on an app that doesn’t have the ability to zoom in. So I had no choice but to buy a stylus. It took some time for me to get used to it. But very soon I could not imagine myself drawing without it. Now I use it even drawing on professional finger painting apps such as “Brushes”. 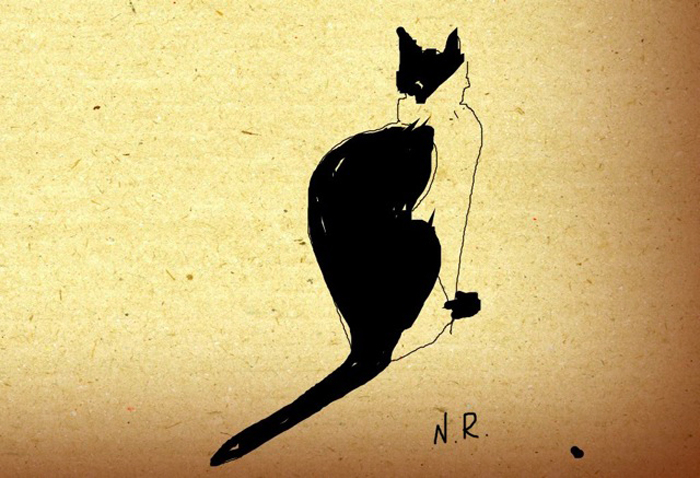 quick sketch on a free app 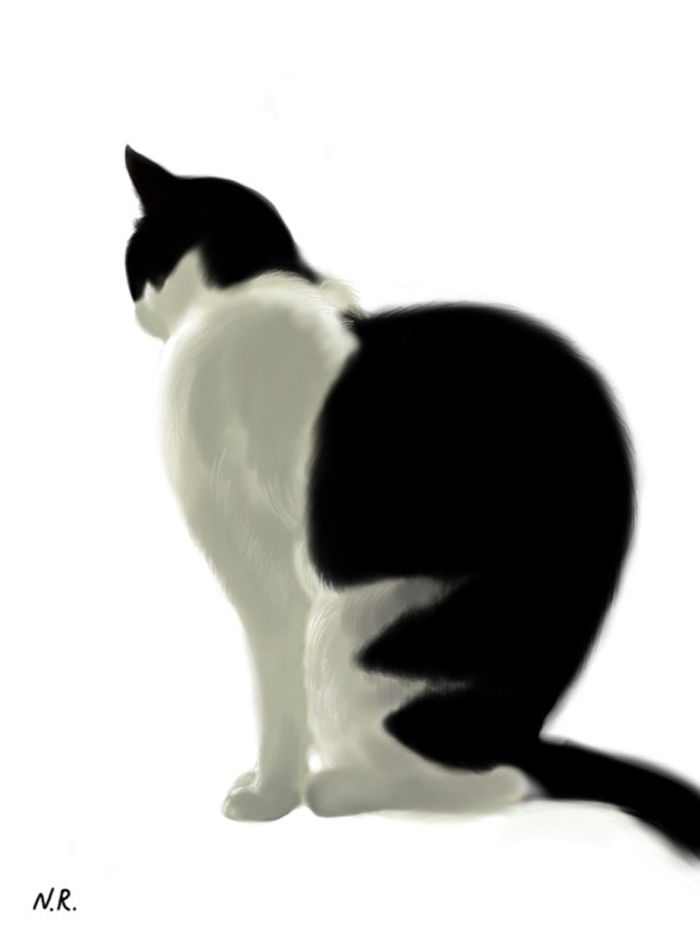 Is it correct to define you “iPainter” and “artistic-reporter”? Why? Mobile digital art is a very recent phenomenon. Therefore, its terminology, as this new art form itself, is just taking its shape. However, it seems that the term “iPhoneography” – which is the capturing, editing, and processing of photographic images with Apple iPhone devices – unlike “iPainting”, has become commonly accepted. By analogy with iPhoneography, I define my practice as iPainting. Other mobile digital artists name their practice as iPad/mobile drawing, iPad art, iPad painting, etc. iPainting is a medium and artistic-reportage is a genre I most often work in. So I can be defined as iPainter as well as artistic-reporter. 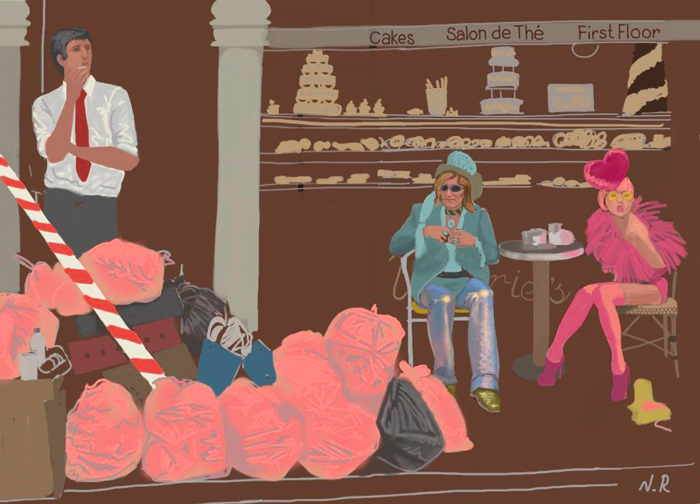 How much is iPainting known in the Art world? Where/when did the digital painting start to be considered? Even though iPainting is only struggling to find its place in the contemporary art world, I have no doubt it will take no long time and it will be commonly accepted. It is most known in the U.S. – the country of invention of mobile wireless technology. No wonder iPaiting is most developed and most known there than in the rest of the world. Looking back in history of arts, the interconnection between art and technology is obvious. Technology always served art. The “camera obscura” is probably the best known ancient device that was used to create works of art. Photography is a pioneering art medium of the 19th century. In the 20th century the invention of the computer trigged new digital art forms such as net art, computer art, and others. Smart phones and other handheld devices are today’s newest medium in art. I believe this 21st century innovative form of digital art – iPainting – was born when first finger drawing app was created. 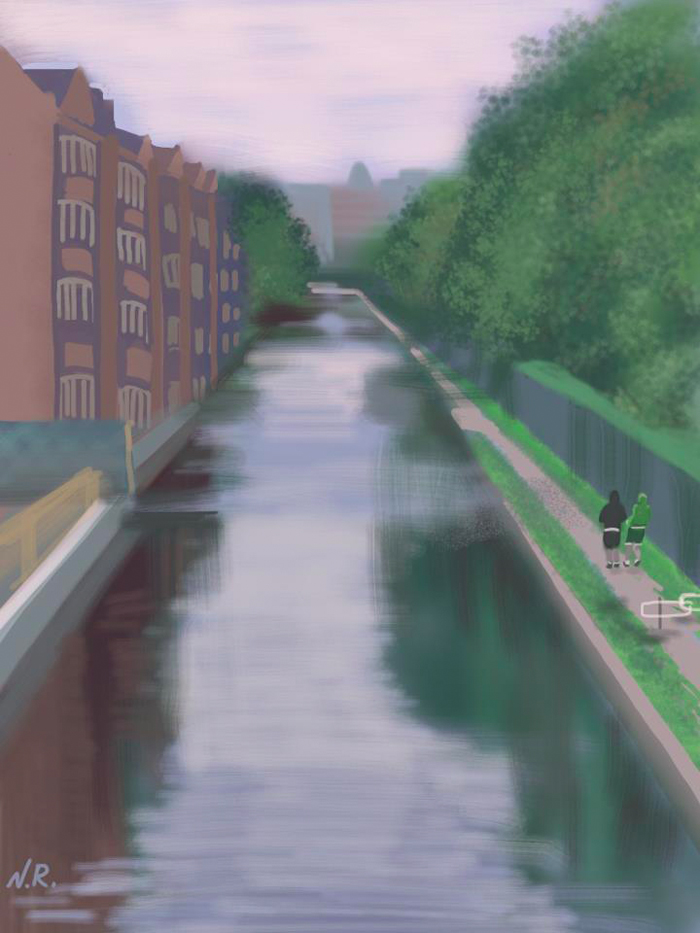 Do you know other iPainters? Would you like to suggest us some artists in particular? The community of iPainters is relatively small. I got to know many of iPad artists on Flickr. There are many very talented artists out there. My personal preferences have changed over time. Today my favorite artists are Mic Rees and Jason Wilsher-Mills – who have their unique and distinctive style:

– Mic Rees based in Australia. I love the expressionistic style of his landscapes. Mic’s photostream on Flickr.

– Jason Wilsher-Mills based in England. “The key themes of my work are my disability, the way I view myself, the past, nostalgia, pain and the positive way I try and deal with it”. Jason’s photostream on Flickr. 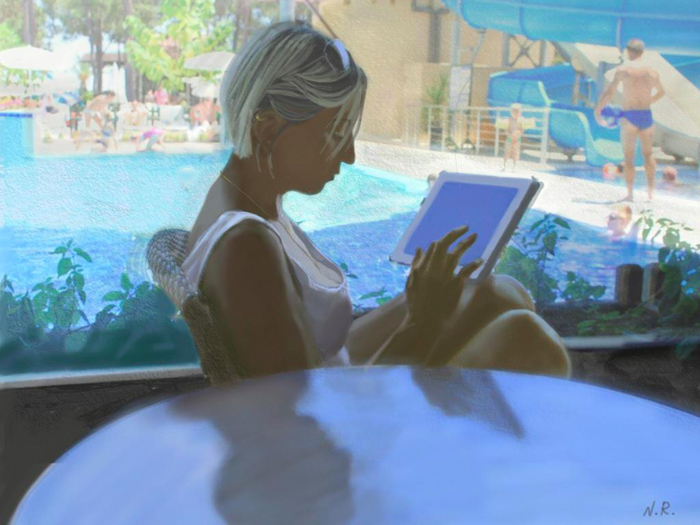 Nadja Ryzhakova with her iPad – selfportrait 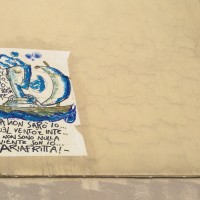 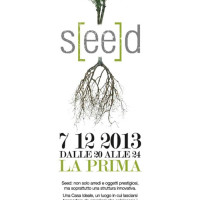 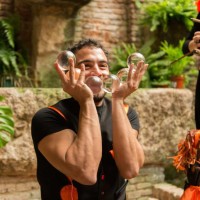 Estación21: at each change of season, a day of Art for everyone in the Barrio de las Letras